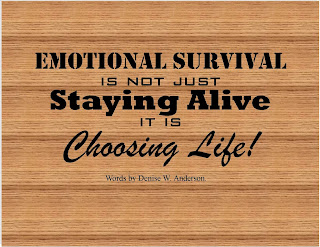 Everyone should spend a week in a mental health unit. It is literally a life-changing experience; at least it was for me. The first time I went, the doctor who admitted me swore that I wasn’t like the others there. How little did he know! It had taken years to stuff my bag of emotions and develop the distorted thinking patterns I was using.

I was admitted for other reasons. The medications I was taking for health problems were out of balance, and I was an emotional wreck. The goal was to adjust things gradually until I was back to “normal.” My husband purchased a greeting card that had a picture on the front that looked just like our doctor. It read, “The doctor says that you will be back to normal in no time.” The verse on the inside quipped, “That will be a first!” We both laughed!

Life at our house was anything but normal. We had seven children ranging in age from six months to twelve years. The roller coaster ride I was on affected our entire family. My doctor finally realized that I was going through menopause and started treating me for it, along with my fluctuating thyroid, hypoglycemia, asthma, allergies, and developing arthritis.

The sign on the nurses station said, “What you see here, what we do here, let it stay here when you leave here.” I think that is a mistake. If more people had a glimpse of what those with mental illness suffer, perhaps they would get help sooner. I know it made a difference for me.

During my week there, I saw what happens to people who try to commit suicide and don’t succeed. I heard the horror stories of dysfunctional families, problems with the law, and poverty. I saw the scars, both mental and physical, that they carried like battle trophies. It was then that I decided that suicide was not for me, no matter what happened.

The hysterectomy I had five years later allowed my physical health to come back to me. For over ten years, I had fought an emotional hormonal battle. Now that it was over, I thought I could do all of those things I had been putting off. Unfortunately, that was not the case. I did not know how to live.

The day I picked up the handful of paring knives from the drainer and saw them in my mind’s eye going into my chest, I was scared. The sun glinting on the cold steel brought me back to my senses, and I called for help. Choose life, for your emotional health!

Denise W. Anderson
I help people of all ages choose life by learning the skills necessary for the establishment and maintenance of emotional health. Everyone experiences difficulties that bring us to a crossroads where we must make decisions that have a dramatic effect on our future and that of our loved ones. See my website at denisewa.com for more information.